Former India opener Aakash Chopra performed a man-to-man comparison between the Test teams of Sourav Ganguly and Virat Kohli. As per his analysis, the former Indian captain’s team emerged on top of the current Indian XI.

Aakash Chopra did a hypothetical comparison between the Test teams under Sourav Ganguly and Virat Kohli on his YouTube channel.

The renowned commentator talked about the achievements of the Test teams under two of the most successful Indian captains.

“Virat Kohli’s team has defeated Australia in their home conditions, the only team to have done so in Indian cricket history. But they lost in South Africa and lost quite badly in England. In South Africa, they came close but lost the series 2-1.”

The following were the teams chosen by Aakash Chopra for his man-to-man comparison between the two outfits.

“If we keep Rohit and Viru together, and we should keep them because they are almost similar calibre players, in Test cricket Viru’s pedigree is higher than Rohit at least currently and I feel even at the end, Viru would be ahead of Rohit. Viru has made lot of runs, even outside India like in Australia and on his debut in South Africa. So, Viru is winning this race.”

“Mayank Agarwal is already miles ahead of Aakash Chopra. There is no shame in accepting that, you can see his runs in Melbourne and Sydney and his two double-centuries in India. So as an opening combination I think Virat’s team is winning.”

However, as far as the middle order goes, Aakash Chopra believed that each of the batsmen in Sourav Ganguly’s team outshone those in Virat Kohli’s lineup.

“At No.3, Rahul Dravid no doubt. There is no question whatsoever. Pujara is good but Rahul Dravid has been outstanding.”

“At No. 4, however much you may want for the scale to tilt in Virat Kohli’s favour, it will always tilt in Sachin Tendulkar’s side. So Sourav’s team is winning this race as well. Kohli is exceptional but you are against Sachin Tendulkar in Test match cricket.”

“I will have VVS Laxman ahead of Ajinkya Rahane. Rahane has also scored lot of runs and eventually they may have the similar numbers, but definitely Laxman. I love Rahane but Laxman is ahead in this race.”

“Vihari is a new story, so here also you have to go for Sourav Ganguly. So if we talk about the top 6, other than me, rest of our team is beating them.”

Aakash Chopra kept Wriddhiman Saha and Parthiv Patel on equal footing, with the former being a better wicket-keeper and the latter a superior batsman.

In terms of spin bowlers, Chopra felt that Ravichandran Ashwin was just slightly ahead of Harbhajan Singh due to the number of matches and series he had won for India. On the other hand, he added that Anil Kumble was miles ahead of Ravindra Jadeja.

“It is a very tough call between Ashwin and Bhajji. But Ashwin’s numbers in India, the number of matches and series he has won, you will have to go with him. Bhajji is standing just next to him. If you think about one outstanding performance by an Indian bowler, it will be Harbhajan Singh’s performance in the 2001 series against Australia. Bhajji has that but Ashwin has won more matches.”

Mumbai ➤ 🇦🇺 win by 10 wickets
Kolkata ➤ 🇮🇳 win by 171 runs
Chennai ➤ 🇮🇳 win by two wickets#OnThisDay in 2001, India completed a dramatic turnaround against Australia, coming from 0-1 down to clinch the series 2-1 👏

Harbhajan Singh picked up 15 wickets in the Test 🤯 pic.twitter.com/z0OzZOpshM

“No competition between Jadeja and Kumble. Jadeja is very good but Anil Kumble is one of the biggest match-winners that the world has ever seen. Still the scales are tilted towards Sourav Ganguly’s team.”

In Aakash Chopra’s opinion, the honours are shared between Virat Kohli and Sourav Ganguly’s teams in the pace bowling department as well.

“You can keep anyone in front of Zaheer Khan. Let us keep Ishant Sharma considering the number of wickets he has taken, but the balance will definitely be in favour of Zaheer.”

“At No. 11, I think Virat Kohli’s team would do better when we compare Bumrah/Shami with Ajit Agarkar.”

To sum it up, Aakash Chopra proudly stated that Sourav Ganguly’s team had overshadowed Virat Kohli’s team in a man-to-man comparison.

“So if we look at the overall picture, in Virat Kohli’s team Mayank is winning from Aakash and in the bowling Ashwin and Bumrah/Shami are winning against Bhajji and Agarkar. Only 3 people winning against Sourav Ganguly’s Indian team.”

“Of course, this is never going to happen. This is just a wonderful fantasy to relive the past, that the golden era that we are enjoying now, there was also an earlier era that was golden.”

On a parting note, Aakash Chopra went on to add that once Gautam Gambhir replaced Chopra himself in Sourav Ganguly’s team, it could have been a sure-shot winner against the current Indian team under Virat Kohli.

“When I left, Gautam Gambhir came and the team became even stronger. So, if Gautam also comes then Sourav Ganguly’s team could have been a runaway winner against Virat Kohli’s team.” 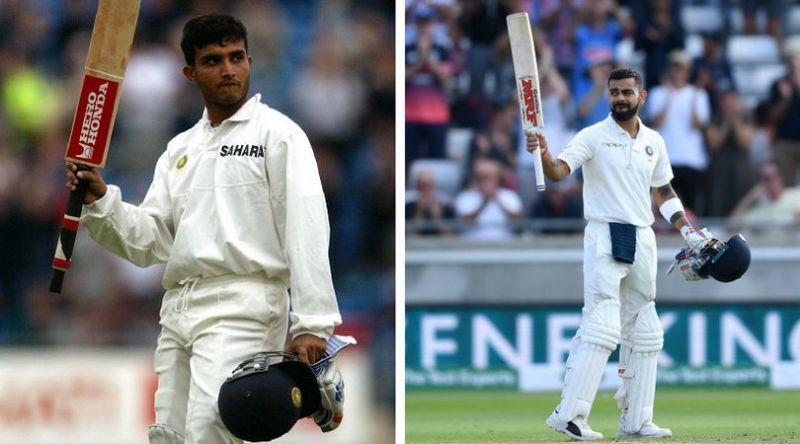 US coronavirus cases rise by over 53,000, third consecutive day of...