Otis and Mandy Rose‘s love story has had everything that makes viewers fall in love with the couple. It all started when Mandy Rose agreed to go on a date with Otis on Valentines Day. But on the day of the date, Dolph Ziggler stepped in and took Rose away from Otis while he just stood there, with roses in his hand and stared at the two having a fun time. It was later revealed that Mandy Rose’s friend, Sonya Deville, orchestrated the entire plot by sending messages to Ziggler and Otis from Mandy’s phone.

When the truth was out, Mandy Rose broke ties with her best friend and sided with Otis. Otis finally won the heart of Mandy when he beat Dolph Ziggler at WrestleMania 36, with some help from God’s Greatest Creation. Since then, the two have been enjoying each other’s company in and around the ring as well as on dates.

It is customary for Americans to dawn the Red, White and Blue attire on the fourth of July. Many Rose celebrated the day in the way she knows best, dressing herself in the colour of the American flag.

Otis couldn’t help but make his girlfriend feel special on the day and commented on the picture that Mandy Rose had uploaded on Twitter. The picture and Otis’ comments have been embedded below:

Otis surprised the WWE Universe in May when he won the Money In The Bank Ladder Match at the namesake PPV. His win guarantees him a shot at the Universal Championship at any moment he seems fit. Now that Otis has the briefcase, the current Universal Champion, Braun Strowman has a huge target on his back.

Otis teased cashing in the briefcase on the episode of WWE SmackDown that followed Money In The Bank. Strowman and Otis teamed together to face John Morrison and The Miz in a Tag Team Match. After his team was victorious, Otis hinted at pulling a fast one on Strowman while he was distracted by Mandy Rose but didn’t go through with it.

Otis is still Mr. Money In The Bank and will be waiting for the right opportunity to become the Universal Champion. 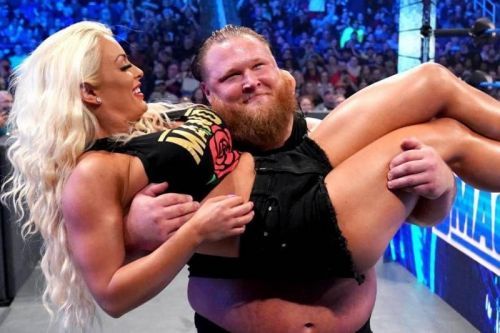