The opening of an Iranian supermarket in Venezuela has drawn criticism from Iranians online who say Tehran should prioritize providing for its people at home, according to reactions on social media.

An Iranian supermarket named Megasis opened its doors to Venezuelans in the capital Caracas on Wednesday.

Megasis is owned by Etka, a company affiliated with Iran’s defense ministry.

The inauguration ceremony was attended by Venezuelan officials and Iranian diplomats including Tehran’s ambassador to the South American country.

The store sells a wide variety of products, from edibles and clothing to tractors, the semi-official Tasnim news agency said.

A conglomerate owned by the #Iranian military and tied to Iran’s missile program has established a retail foothold in #Venezuela, according to a report.https://t.co/wWLSfWQ1p7

Iran’s ambassador to Caracas described the opening of the store as a move to “counter the US’ policy of economic terrorism and support the Venezuelan nation at the time of heightened sanctions,” Tasnim reported.

Iranians took to social media to criticize the move. They argue that Iran is not in a position to offer help to foreign nations given the economic situation at home.

“At a time when millions of Iranians live below the poverty line and the government is unable to provide for the needs of society, the joy and encouragement of state media for the opening of an Iranian supermarket in Venezuela is truly disgusting,” one Iranian user tweeted.

The Iranian economy has been hit hard since US President Donald Trump withdrew from the 2015 nuclear deal and reimposed sanctions on Tehran in 2018. Rising inflation, growing unemployment, a slump in the rial, and the coronavirus crisis have deepened Iran’s economic woes.

“The Iranian regime wastes the country’s resources in Venezuela at a time when lack of capital at home has led to high unemployment,” another user tweeted.

Other users speculated that the supermarket may be a cover for a money-laundering scheme.

Many Iranians are critical of the regime’s foreign policies. They accuse the regime of squandering the country’s resources by supporting foreign allies while neglecting Iranians at home.

Acting Assistant Secretary for US Department of State’s Bureau of Western Hemisphere Affairs Michael Kozak told journalists that the opening of the store represents “an alliance of pariah states.”

Like Iran, Venezuela is also under severe US sanctions that have crippled its economy.

Iran said in June one of its vessels discharged a cargo of food and medical supplies at the Venezuelan northern port of La Guayra to supply an Iranian supermarket.

Iran also sent five gasoline tankers to Venezuela in May to help with the gas shortage in the country. 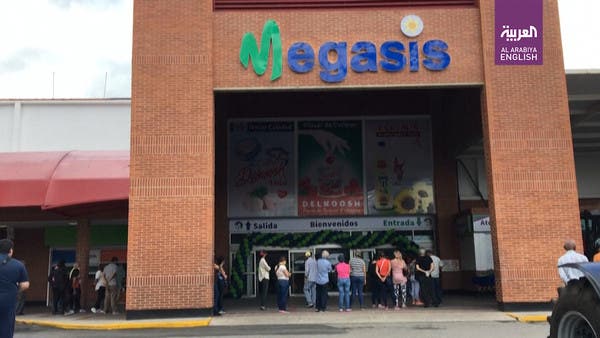