A tight tussle between the Chennai Super Kings (CSK) and the Delhi Capitals (DC) went all the way down to the wire. A seemingly achievable target from the last two overs turned on its head after Sam Curran bowled a brilliant 19th over for just 4 runs. It didn’t matter, eventually, as Axar Patel’s lusty blows finished the game off for DC with a ball to spare.

Opting to bat, CSK lost Sam Curran early, but Watson and Du Plessis slowly and steadily built a partnership. Du Plessis’ 58 and Watson’s 36 set a solid platform for CSK which was perfect for Ambati Rayudu and Ravindra Jadeja to then blaze away, as they guided the team to a strong but gettable total of 179/4.

In reply, CSK were sloppy in the field as they afforded Shikhar Dhawan four lives off dropped catches. Dhawan capitalised in the ultimate manner – bringing up his maiden IPL hundred and carrying his bat.

The innings was interspersed with some hitting by Stoinis and a steady partnership with DC skipper Shreyas Iyer, but the real impetus came in the final over. With Dwayne Bravo injured, Jadeja bowled the final over to another left-arm orthodox bowler in Axar Patel, and he disappeared for three mighty sixes.

In a game that has locked CSK in the bottom half of the points table for now, there were a few brilliant performances by both sides, and some lacklustre ones as well. Here are the top 3 underperformers from the DC vs CSK IPL game.

Formerly the Rajasthan Royals skipper, Rahane has found the going tough since making his first appearance for DC this season.

Inevitably in early due to Shaw’s poor run of form, Rahane has the hard task of playing out the opposition’s best bowler. It does not help that he has consistently struggled to rotate the strike, although him playing out the good bowlers has allowed Dhawan to make hay at the other end.

In this match, Rahane improved slightly from his woeful 2 from 9 the previous game to put together 8 off 10 with a boundary included. He was frustrated by Deepak Chahar, playing out four dot balls in the first over before being dismissed by the attacking bowler trying to clear the in-field.

The poor showings by both Rahane and Carey have not significantly cost DC in the results column, but they would be eagerly awaiting Rishabh Pant’s return.

Apart from Sam Curran’s unexpected dismissal in the first over, CSK’s batting lineup showed solidity and an ability to accelerate as needed. In came MS Dhoni looking to establish a control over proceedings and score quickly, with the score just in excess of 100 after 14.4 overs.

That he played no part in CSK’s mad dash in the death overs may cause doubts in the mind of the longest-serving captain in the IPL, who is enduring one of his leanest IPL seasons with the bat. His 3 off 5 was inadequate, and CSK were lucky that Jadeja was able to walk in and set the stage on fire.

Dhoni had to make the choice between two spinners for the final over, and was made to look silly by Axar’s hitting eventually. The 39-year-old also dropped a regulation catch that would’ve sent back Dhawan for less than half the runs he ended up making.

Taking strike against CSK swing bowler Chahar, Shaw lasted a total of two balls as he misjudged an outswinger. Trying to push it to the on-side, all he could do was lob a catch back to the bowler, who obliged. Shaw walked back to put immense pressure on the incoming Rahane, who is anyway fighting for his place in the team.

DC would hope that their pocket dynamite sorts out the issues he has at the start and regains his attacking form. What works well for the team is the way Dhawan has bailed the team out despite the poor showings by Rahane and Shaw, but they need the 20-year-old to step up at the earliest. 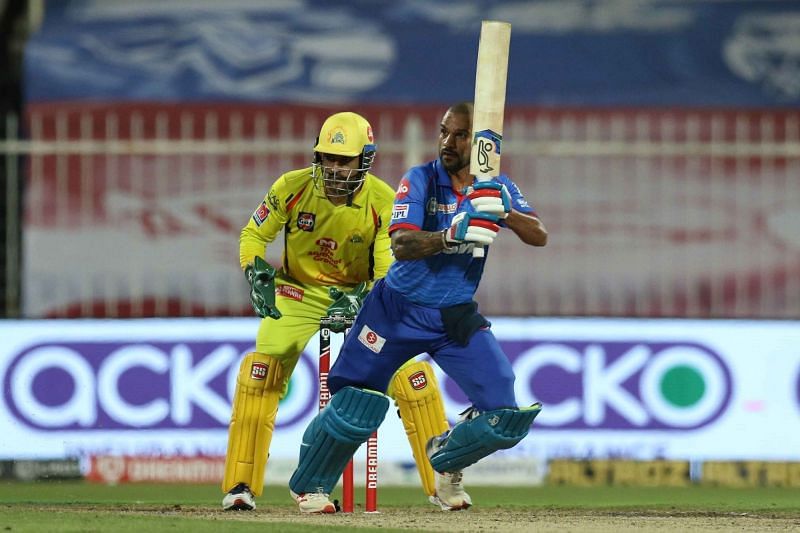