Dozens of migrants, including children, have been discovered hiding in a refrigerated truck, Austrian police said Wednesday after arresting a suspected member of a network smuggling people through the European Union.

The case recalled the 2015 tragedy of 71 decomposing bodies loaded in the back of a refrigerated vehicle abandoned on a highway in Austria.

They had died of suffocation in Hungary and four smugglers – an Afghan and three Bulgarians – were convicted and jailed.

Police said in the current case, 38 people from Syria, Iraq and Turkey, including six minors, were held last week after their truck pulled up in Lower Austria.

The migrants said they had “been afraid they would die and suffered a lack of oxygen” during the trip from Romania through Hungary, a police statement said, without specifying where the truck was headed.

Several passengers – who paid between 6,000 and 8,000 euros ($7,100 and $9,500) for the trip – managed to run into nearby fields when the vehicle stopped along a highway, leading witnesses to alert the authorities.

Human traffickers are getting rich as coronavirus crisis prompts migration

The 51-year-old driver, a Turkish citizen living in Romania, was also arrested.

The 2015 tragedy shook international public opinion, contributing to the temporary opening of European borders to hundreds of thousands of asylum seekers.

Austria – led since 2017 by conservative Chancellor Sebastian Kurz – has increasingly tightened border controls and refused to take in refugees. 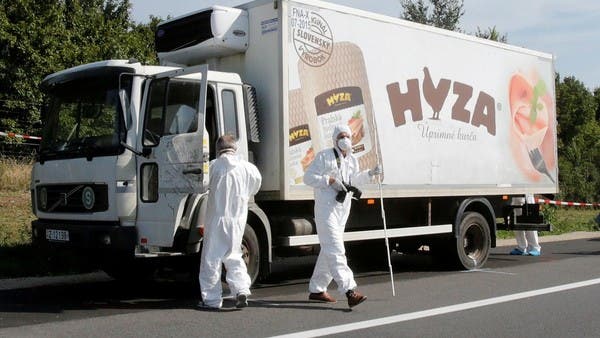